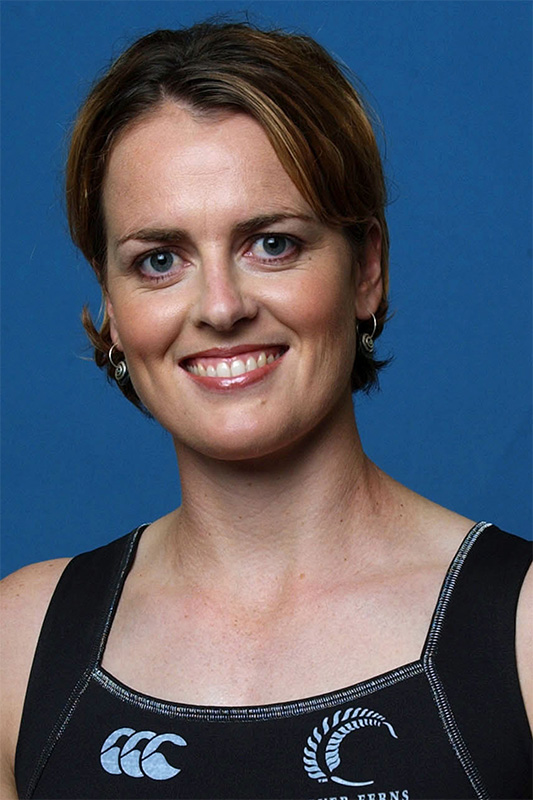 A consummate team player, Lesley Rumball quickly made the leap from U21 where she helped New Zealand to a first-ever Netball World Youth Cup title in 1992, to the Silver Ferns in 1994.

Rumball, who was playing senior club Netball at 11, in the same team as her mother, rose rapidly through the ranks.

A quality performer in a range of midcourt positions, she was a natural standout at wing defence. An intelligent player, her height, athletic ability, off-the-ball work and relentless harassing of attackers made her a classic wing defence.

Rumball’s Southland roots were embedded in her personality which showed no bounds to her reliability, dedication and work ethics in pursuing sporting excellence.

She became physically stronger and increasingly agile as her prolific 12-year international career progressed, which included assuming the captaincy in 1996 (our 18th).

The highly-motivated she completed two degrees – in physiotherapy and medicine – while competing at Netball’s highest level. She also practised as a doctor during this time.

A key figure for many years, Rumball won a coveted Netball World Cup title in 2003, her international swansong coming in 2005.

She held the record for Tests played for New Zealand –110 – until it was eclipsed by Irene van Dyk at the 2010 Commonwealth Games.

Her enduring services to Netball were acknowledged when she was appointed an Officer of the New Zealand Order of Merit (NZOM) in the 2004 New Year’s Honours list. In 2016 she was inducted into the New Zealand Sport Hall of Fame at the Halberg Awards.