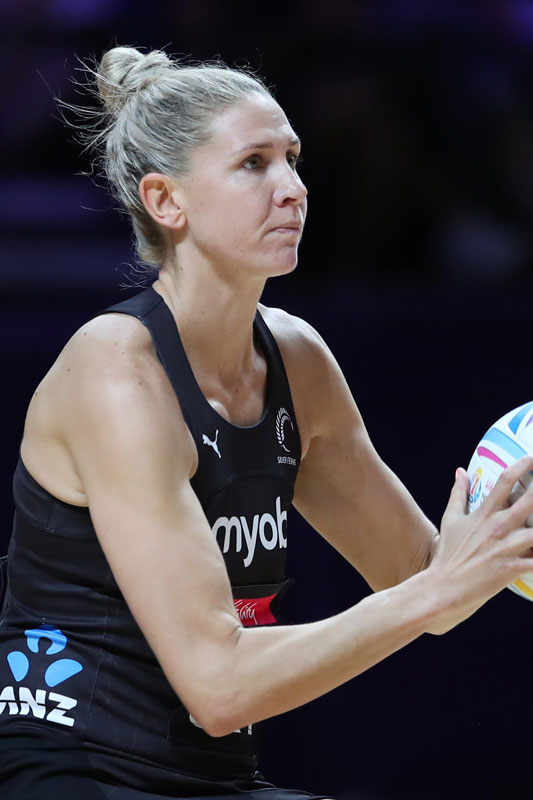 GK
GD
Seemingly destined to plug the only gap in her glittering resume, inspiring defender Casey Kopua (nee Williams) came out of retirement in style to help the Silver Ferns clinch the 2019 Netball World Cup title.

A proven performer over a long time, Kopua came back from the birth of her first child and international retirement to have one last tilt at the sport’s pinnacle event.

The 2019 World Cup title was a fitting finale for Kopua, who had come up empty-handed in three previous attempts at claiming netball’s greatest prize. Honoured as an Officer of the New Zealand Order of Merit for her services to netball in 2011, Kopua also attended three Commonwealth Games, winning back-to-back gold medals in 2006 and 2010.

An in-circle defender of outstanding quality, Kopua fulfilled her early promise when making her Silver Ferns debut in 2005. Earlier that year, Kopua had been a member of the NZU21 World Youth Championship-winning team.

A match-winner and one of the game’s greatest defenders, Kopua showed her durability when returning from a nine-month lay-off, recovering and rehabilitating from a serious knee injury, to lead the team at Netball World Cup SYDNEY 2015.

During 2014, Kopua captained the Silver Ferns for a record 62nd time, eclipsing Lyn Gunson’s long-held record of 61 Tests as captain.

The popular Kopua became the sixth Silver Fern to reach the 100-Test milestone in 2015 during the Constellation Cup.

Kopua brought a strong work ethic to the Netball court while being fiercely proud and loyal to the core. Setting the on-court standards with her strength in the air, through-court carries, ability to make an intercept out of nothing and single-mindedness, others fed off Kopua’s sheer determination, a player who led by example.